Essential Restoration Undertaken at Freer House
FH Winter 2020-2021 Report
When COVID-19 precautions required the temporary closure of the Freer House to the public in 2020, the opportunity arose to pursue critically needed infrastructure repairs. Exterior wood windows, doors, and trim are important elements of the unique architecture of the Freer House. Unfortunately, many of these windows and doors have suffered severe deterioration due to decades of deferred maintenance.
Thanks to Wayne State University's Facilities, Planning and Management Department (WSU/ FPM) more than 100 windows, doors, and large sections of exterior trim were expertly repaired and repainted in 2018-19, with an additional 50 windows and more trim restored during the Summer of 2020! Work this year included cleaning and repainting the historic ornamental iron grilles originally installed by Freer in 1907 for the Peacock Room windows. We extend our sincere thanks to WSU painters Terry Dunn and William McDonald, carpenters Steve Burchart and Kevin Jonas, and FPM supervisors Dave Kuffner, Tim Herr and Doug O'Brien, for their outstanding work. Additional thanks to Freer House board member, John Douglas Peters, who sponsored the complete restoration of a large 1892 leaded glass window in the main hall. As a result of their efforts, the Freer House is not only more beautiful, but also more resistant to harm from rain and severe weather.
Bronze Chinese Lamp Replica Project Underway
FH Winter 2020-2021 Report
A surviving treasure of the exterior ornamentation of the Freer House is a rare bronze Chinese outdoor lamp, depicting the head of a dragon and tail of a phoenix, in an elaborate coiled design which originally held a round opaque globe with an electric bulb inside. The lantern/lamp was originally installed at the northwest corner of the house to shed light on the courtyard garden side entrance of the Freer House. At some point in the 1980s, the lamp was removed and was about to be thrown out, when it was discovered by Dr. Thomas W. Brunk and stored away for safe keeping. Thanks to the generous support of Freer House member Dr. David Weinberg, a project to create a reproduction of the lamp is now underway, with the goal of installing a bronze replica in its original outdoor location in Summer 2021, with the original lamp protected and displayed inside the Freer House. James Viste, Head Metalsmith, Edgewise Forge, who created replicas of the original iron railing for the Peacock Room porch and the bronze replica of the original doorbell, is handling this exciting project, with assistance from artist, John Rizzo.
Garden Project Grows!
FH 2019 Year End Report
With successful completion of the beautiful courtyard garden, 2019 saw the expansion of the garden project to include the east side, front staircase plaza of the Freer House. K.C. Runciman Landscapes, designers of the revitalized Freer House courtyard garden, was engaged to extend the plantings to the area east of the front door of the Freer House, facing Ferry Street. The historically influenced garden plantings now encompass the entire circumference of the Freer House in aunified design that reflects Freer's original combination of American and Asian plants, trees and shrubs. We are grateful to our many garden project donors for making this garden expansion possible! 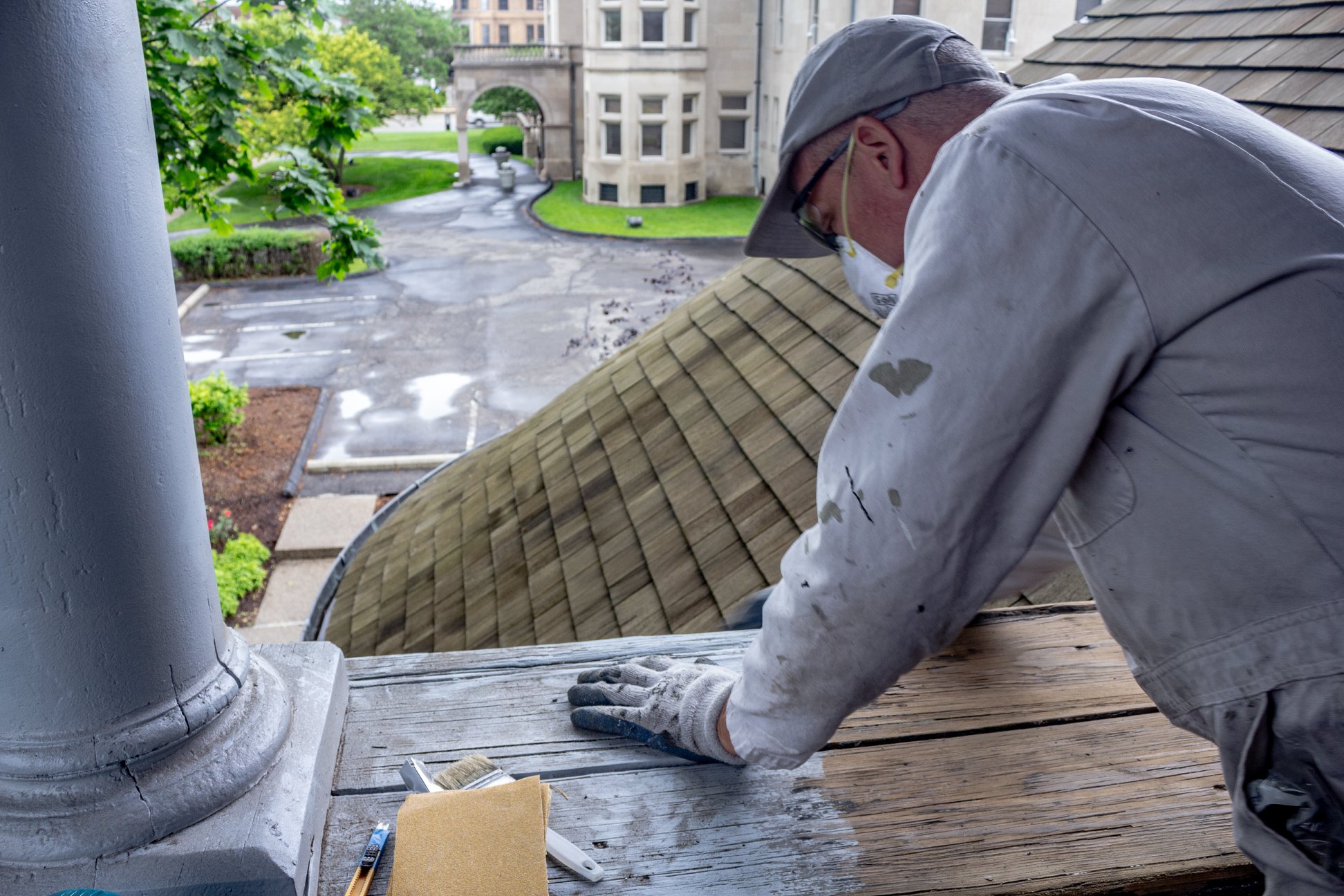 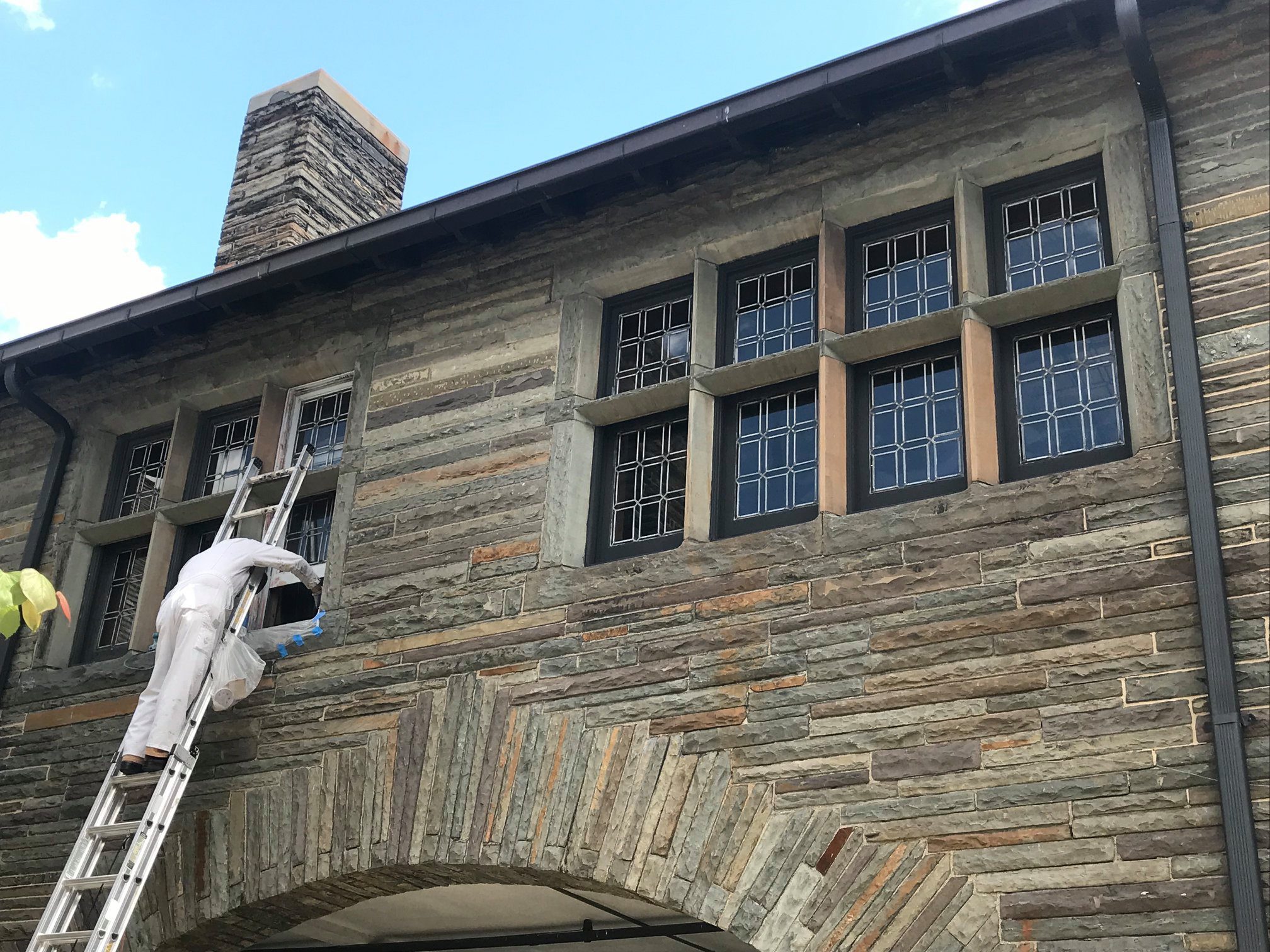 This summer, thanks to the tremendous efforts and skills of Terry Dunn, journeyman painter, and support from Dave Kuffner, Tim Herr, and Doug O'Brien of Wayne State's Facilities, Planning, and Management Department (FPM/WSU), so far, 26 wood windows have been resurfaced, repaired, and repainted along with the second floor sitting room porch!

Since last summer, thanks to Mr. Dunn and FPM/WSU, a total of 56 historic windows and doors have been restored, greatly improving areas that had not been repainted in over four decades!

Terry's excellent work has drastically improved the condition and preservation of the exterior of the house, giving new life to windows that were severely deteriorated.

We thank Terry Dunn and FPM/WSU for all of his expert restoration work on this treasured landmark at Wayne State University and Detroit!

James McNeill Whistler's "The Princess from the Land of Porcelain" Officially Installed! 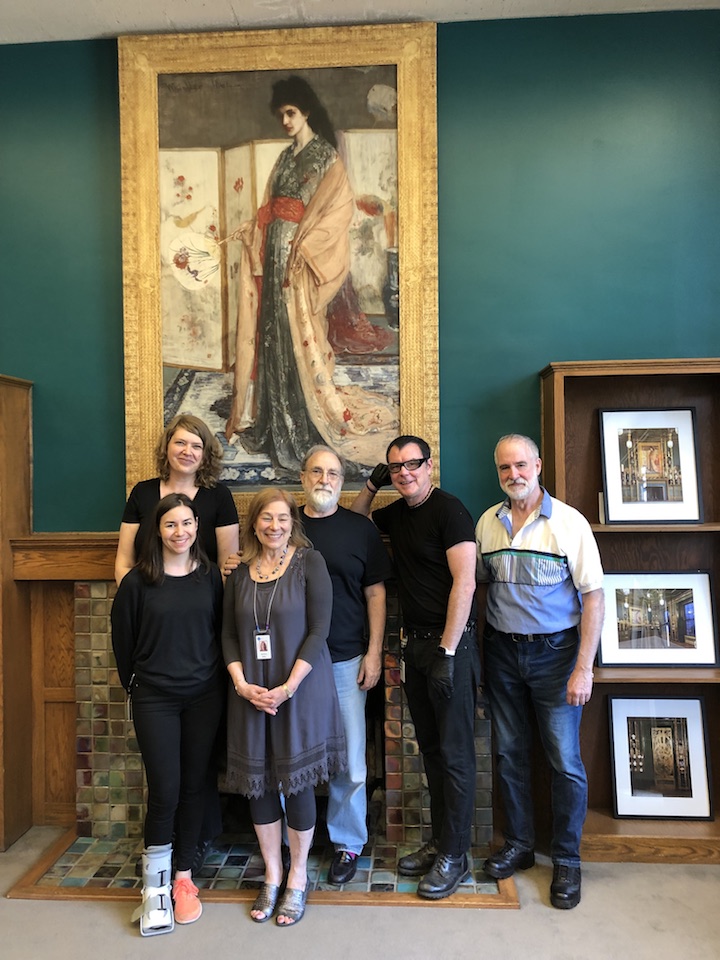 David Brainard, Sarah Burger, Alicia McCullough, and Steve Shaw from the Detroit Institute of Arts, Collections Management team came to the Freer House to officially mount our James McNeill Whistler (1834-1904) Giclee reproduction of "The Princess from the Land of Porcelain" on our newly painted wall above the Pewabic fireplace in the former Peacock Room. The east wall above the fireplace was recently painted to be a similar color as the original Peacock Room in order to help place the painting in its original context.

"The Princess" was done by Whistler in the mid 1860s as part of a series of costume pictures and then purchased by British shipping magnate Frederick R. Leyland around 1867. The painting was hung in his London dining room and displayed with his collection of Chinese blue and white Kangxi porcelain. "The Princess" was then purchased by Glasgow collector William Burrell after Leyland's death in 1892. Freer subsequently purchased the painting in 1903, and soon after acquired the entire Peacock Room for his Detroit home, the year after Whistler's death. The Peacock Room transitioned from Detroit to Washington D.C. together with the rest of Freer's art collection after his passing in 1919 but the house and its history remain!

The original painting now hangs in the Smithsonian's Freer Gallery of Art as a part of their permanent Peacock Room exhibit. The Freer Gallery of Art, kindly provided permission and assistance for the reproduction of this work, along with several others that hang in their original locations in the house.

A big thank you goes to Barbara Heller, Director and Conservator, Special Projects at the DIA, and Freer House member, for her continued support of this Peacock Room project. Her assistance in deciding to paint the east wall color and selecting the color has helped to bring the room to life!

An additional special thanks goes to Freer House Board Member and volunteer John Douglas Peters for his support by crafting and assembling the painting reproduction.

The former Peacock Room looks great with its new additions thanks to all involved! 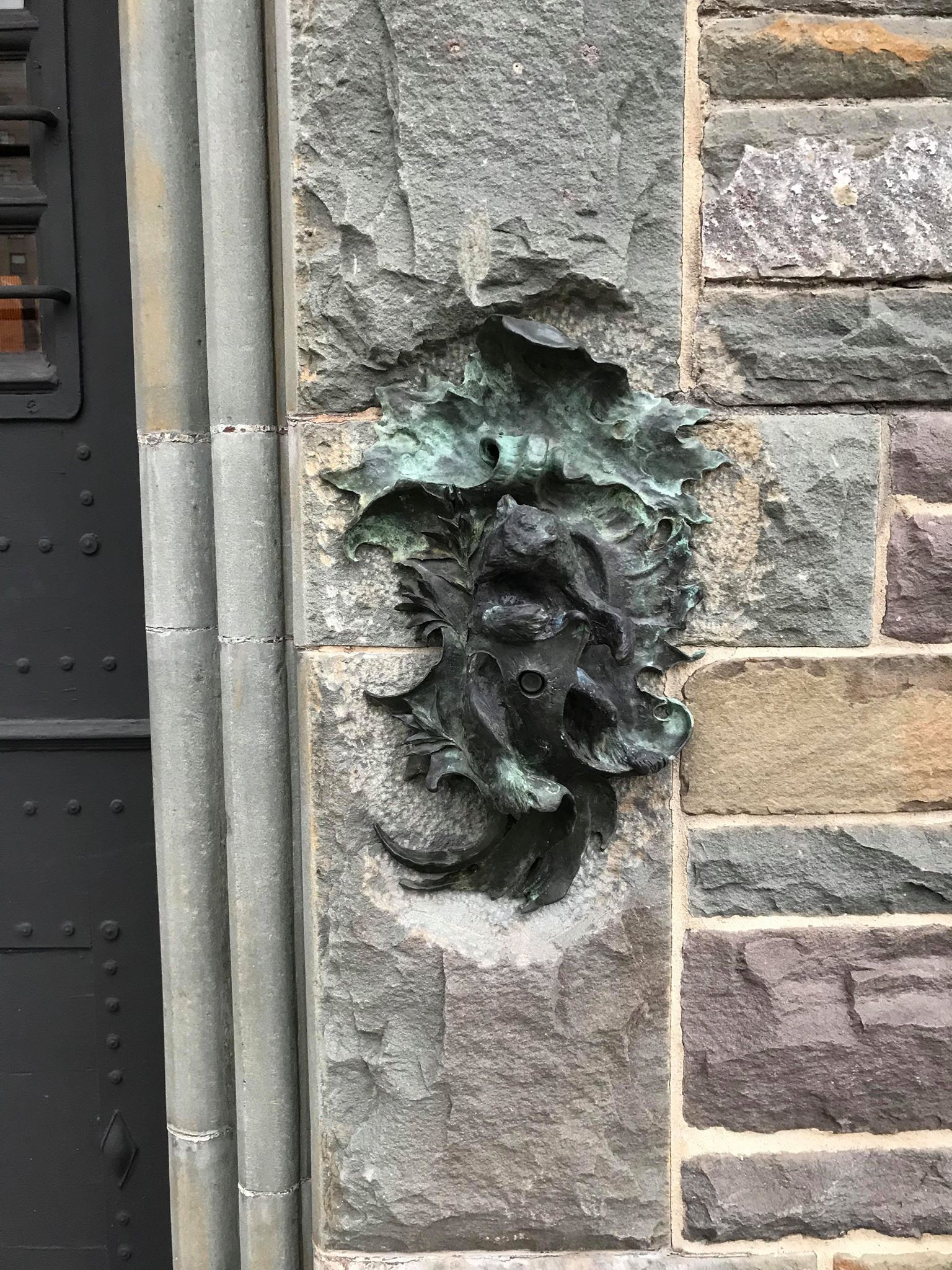 The ornate, sculpted doorbell features a bear with his head cocked as if listening for the bell to ring. Unfortunately, the doorbell was stolen in the 1980s, but was miraculously recovered and returned soon thereafter. Ever since it has been secured in a safe and only brought out for viewing at Freer House events.

A long-held dream of the late Dr. Thomas W. Brunk, Freer House historian, was to see a replica of the doorbell made and installed outside the Freer House.

Thanks to the efforts of master metalworker, James Viste of the College for Creative Studies and Edgewise Forge, and support from the Americana Foundation, a beautiful replica of the original doorbell was cast and installed in September.

The Freer House was excited to install three new giclee reproductions of paintings by the American artist, James McNeill Whistler, originally owned by Charles L. Freer throughout the house. Giclee reproductions involve the use of photo transparencies of art, printed and transferred onto canvas, to give the look and feel of an original painting. These reproductions for the Freer House were crafted by John Douglas Peters with assistance from Tom Dickinson and supported by our generous donors.

The Freer Gallery of Art, Smithsonian, kindly provided permission and assistance for the reproductions of these works from their collection, and the Detroit Institute of Arts provided members from its collections management team to hang these beautiful additions to the Freer House. To preserve the authenticity of the house, each giclee reproduction was placed where the original painting hung during Freer's life." 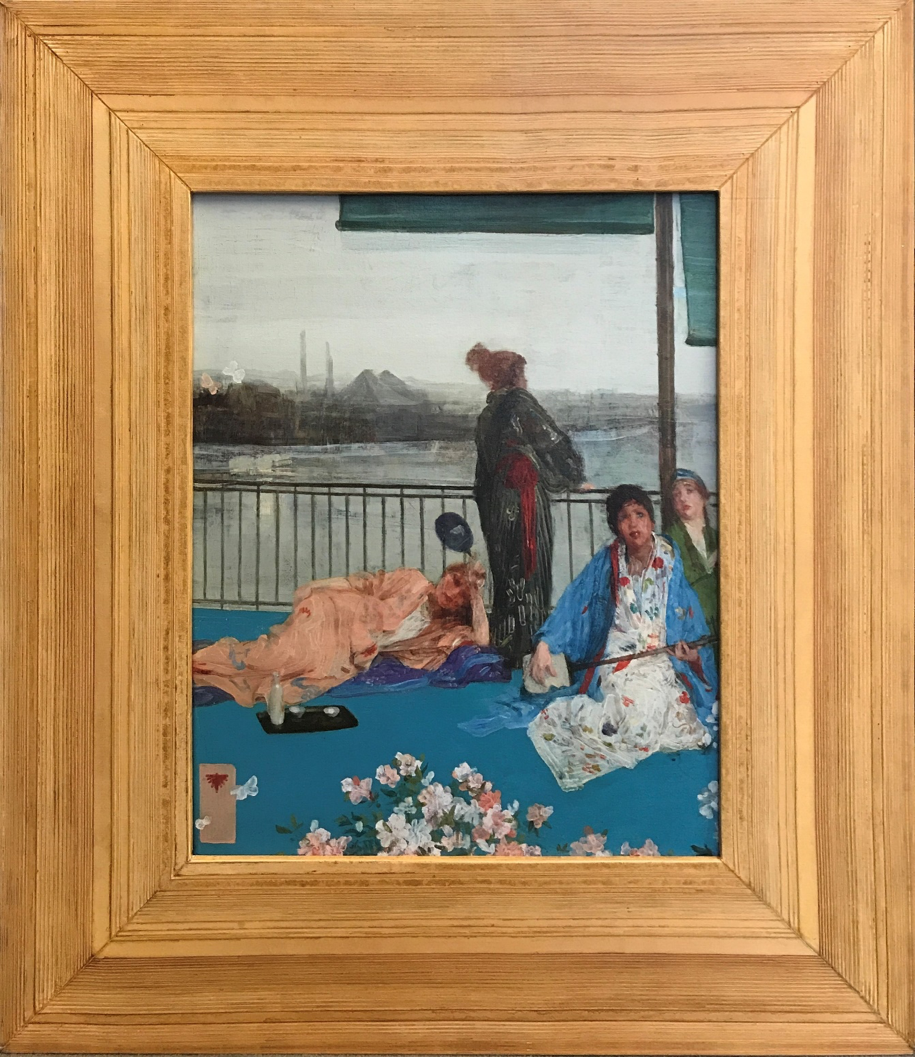 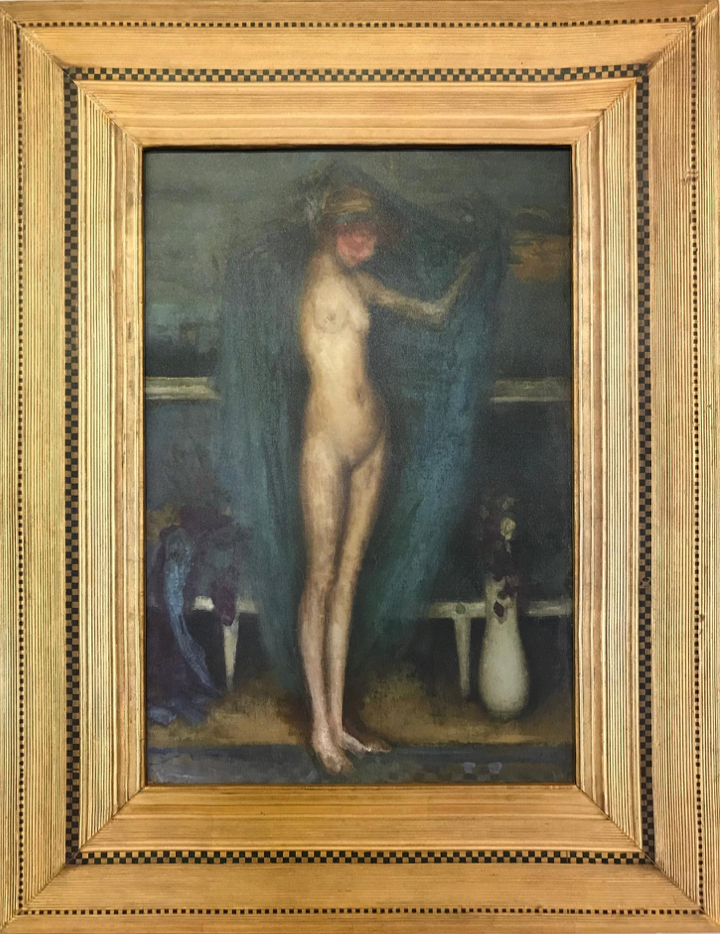 The Princess from the Land of Porcelain, 1863-1864 (Peacock Room)
A special thanks to David R. Weinberg, Ph.D., and the Americana Foundation for sponsoring this reproduction 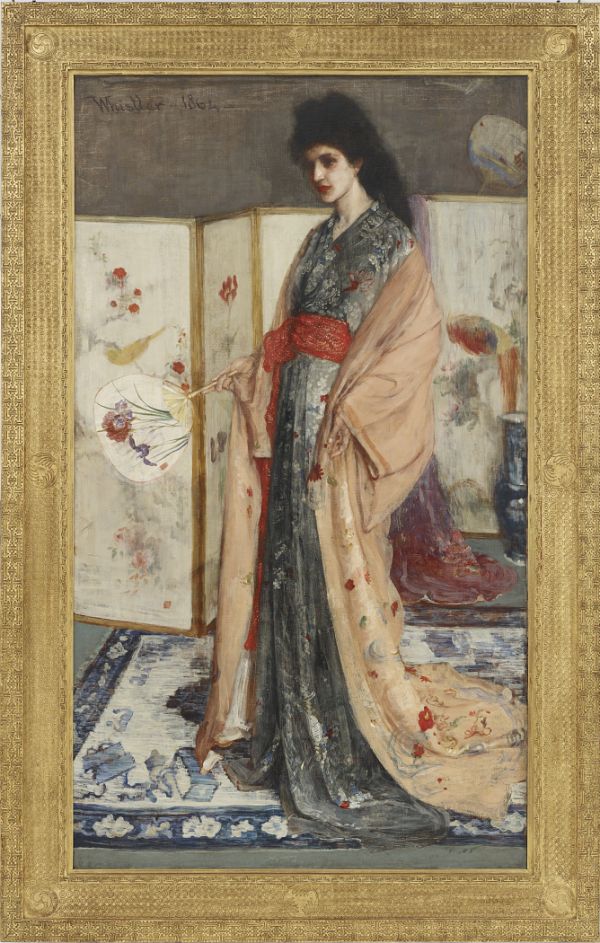 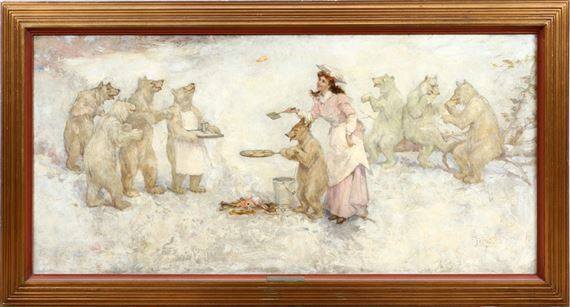 "Flapjacks" is the first and currently only original, Freer owned painting that currently resides at the Freer House!  In 1892, F.S. Church gave this painting to Freer as a gift upon the completion of his new Detroit home.  Unlike most of the works Freer owned, this painting did not go to the Smithsonian.  "Flapjacks" was instead bequeathed to the then British Consul General in Detroit, Howard Graves Meredith, who bequeathed it to the famous and recently restored and reopened, Detroit Club.

Almost 100 years later, the painting was rediscovered at DuMouchelles Auction House in Detroit, where a generous group of donors successfully bid on the painting and donated it back to the Freer House.  We thank all our donors who contributed to the purchasing of this painting as well as Ken Katz at Conservation and Museum Services for his cleaning and conservation work on the painting itself. 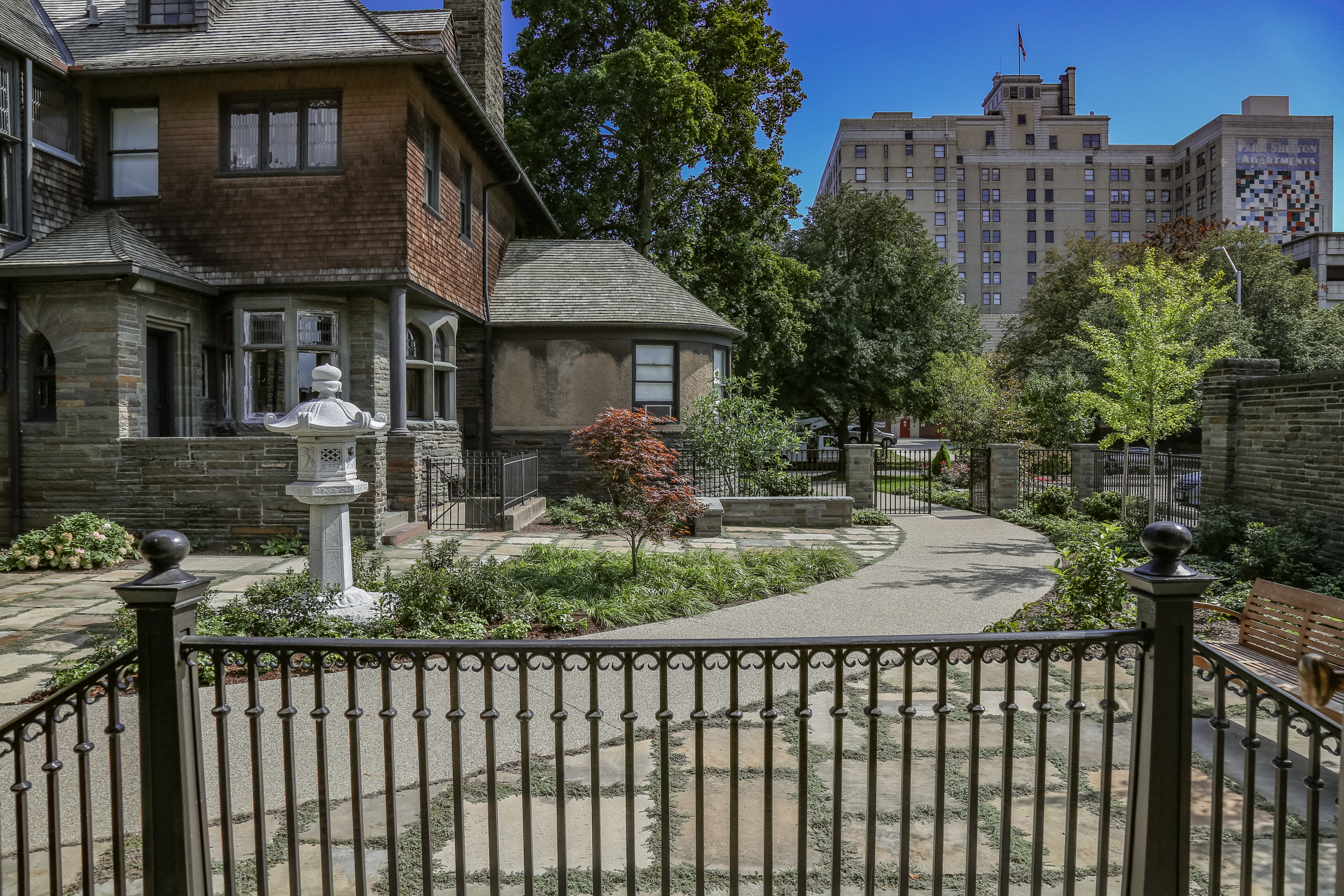 The Freer House Garden Revitalization project was a 6 year endeavor with the goal of creating a garden that revitalizes the garden that Freer once had.  Over the course of these 6 years and with the support of our many generous donors, we were successfully able to complete the garden in the summer of 2018.  The garden has been dedicated in honor of Phebe Goldstein and in memory of Denise Little.

And a special thank you goes to the late Dr. Thomas W. Brunk whose consistent research on Freer and this historic house helped to make this possible.

To donate to the garden maintenance fund, please contact:
Rose Foster at 313.644.2509 or rmfoster@wayne.edu or William Colburn at william.colburn@wayne.edu

Colorful Discoveries Revealed
Freer House Report: Spring 2016
Funded by the Americana Foundation, a partnership project with the DIA's Conservation Department Research Scientist, Cathy Selvius DeRoo, now in its 4th year, has resulted in some stunning discoveries regarding the beautiful original decorative paint treatments created for Freer by various American artists and craftsmen for his home between 1892- 1906, and now mostly hidden under subsequent layers of institutional wall paint. Dr DeRoo presented her remarkable fndings at the November Freer House public lecture event, and in an offcial report, adding greatly to our knowledge of these extraordinary decorative wall surfaces. Whistler Gallery

Timeline exhibit Installation "A House and its History" (Completed in 2012)

Set in an arched passageway leading to the rear of the home, the archival photos, captions and quotes reveal Freer House history from construction to modern day. It also includes the intertwined history of Merrill Palmer Institute.
View or download print version of Exhibit