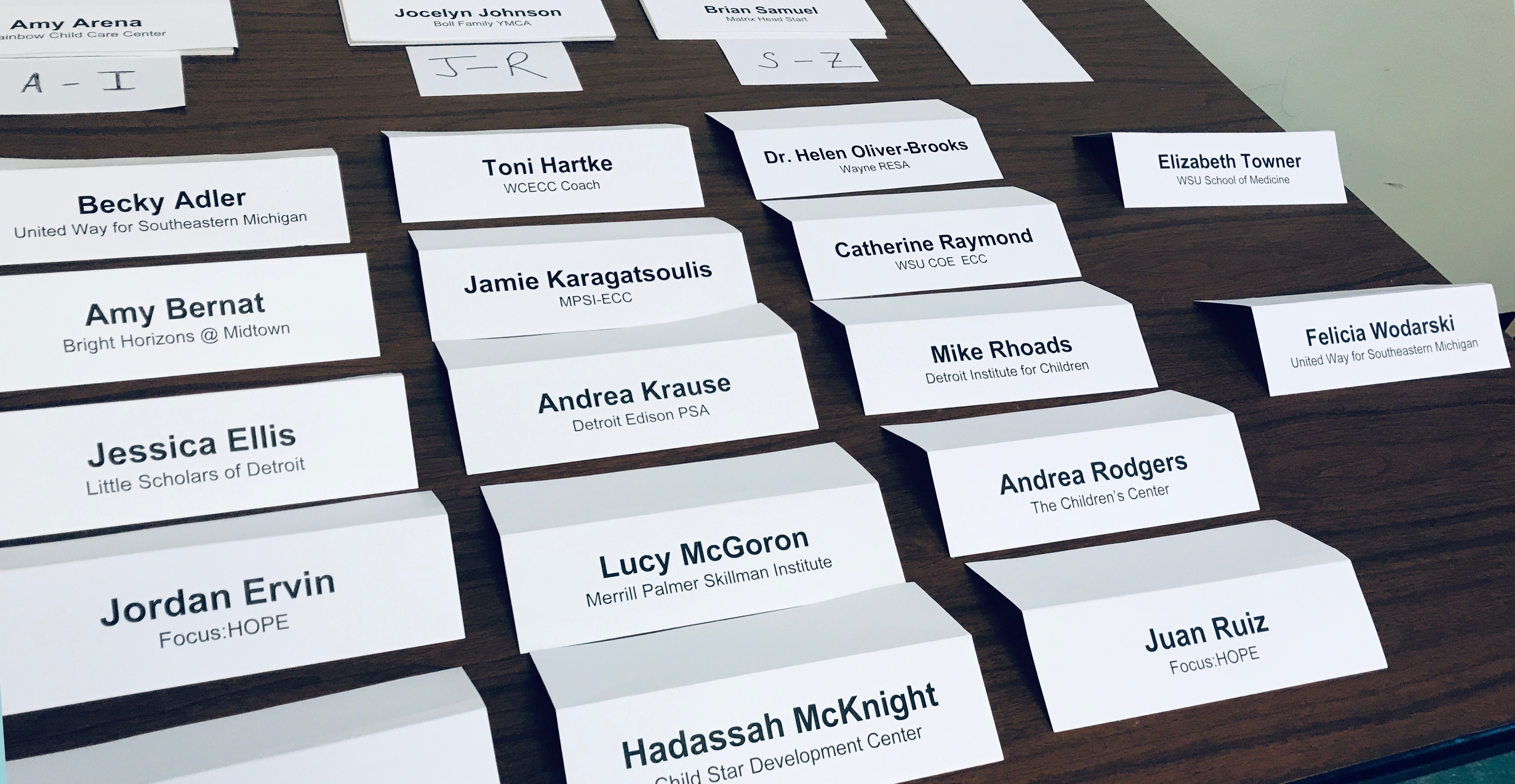 Service to the community has been a part of Merrill Palmer since its creation in 1920. Today MPSI's programs and faculty strengthen that tradition by offering training for parents and teachers, supporting the directors of nearby early childhood centers to strengthen preschool education in Detroit, and showing divers teens how to find and celebrate their similiarities.  Faculty members serve our community with research designed to improve family well-being and board memberships on child and family organizations, and state and national professional organizations. Read more MPSI engagement at the bottome of this page.

Woodward Corridor Early Childhood Consortium -- The Consortium was created in 2011 as a collaboration among the directors of early childhood centers in the Midtown, Downtown, and North End Detroit and includes several engaged community partners who share the goal of enhancing the quality of early education.

The annual Giant Step Teen Conference brings teenagers together from diverse backgrounds to discover the important issues they have in common. Held each fall, this free conference has run for more than 30 years. It strives to improve attitudes, open minds and create tolerance, acceptance and harmony.  Public, private, charter, parochial, and home schools from across southeast Michigan send students to Giant Step. Students from a broad range of neighborhoods, cultures, ethnicities, religions and incomes may enter as strangers, but they leave as friends.

Parent Trainings -- Healthier Urban Families offers high-quality training for parents, keeping the needs of the community at the forefront. We have created tailored trainings to meet the needs of community agencies, places of worship, Head Start, Early Head Start, the Department of Human Services, and more. Expert speakers can be provided at times and locations convenient to your organization. Recent trainings include:

To schedule a training at low- or no-cost, contact Beverly Weathington at ac8787@wayne.edu.

Mothers & Infants
The Infant Service began in 1927 as an extension of the pregnancy service. Mothers could bring their babies to Merrill-Palmer to check on their feeding and physical development. Interest in babies led to later involvement in the Cornelian Corner. This Detroit professional group promoted healthy parent-child development. Their "Rooming-In" project infour Detroit hospitals kept mothers and babies together immediately after birth. This common practice today was novel at the time. In 1947 Detroiters presented their idea at the conference of the American Medical Association. In 1944 Merrill-Palmer began conferences to share information about infant and maternal health. The Infant Conferences, held annually between 1957 and 1975, helped launch infant studies as a specialty subfield and the Institute's Infant Mental Health program in the 1980s.

Minding Rosie the Riveter's Children
The Works Progress Administration (WPA) started emergency nursery schools in the 1930s to help working parents through the Great Depression and to create jobs for teachers, cooks and nurses. As World War II loomed, women filled jobs when men went to war. Their children would need care and the WPA programs became a model for how the government could help working women during the war. By late 1943 these nursery schools and daycare facilities hit capacity and many often had waiting lists. Merrill-Palmer worked with the Detroit Board of Education to train staff and develop standards for these "war nurseries" in Michigan. Despite assurances that federal funding would continue after the war, support ended in 1946. Two decades later, the war nurseries provided a model for federal Head Start programs.

Training Women to be Wives and Mothers
Detroit's rapid growth changed the family for both men and women. Merrill-Palmer offered courses around the city on marriage and family life. Homemaking skills for girls and women were taught, but men were not included.As the family continued to change in response to the Great Depression, World War II, and exploding divorce rates in the 1950s and 1960s, Merrill-Palmer expanded marriage and family counseling services and community lectures. Parent education and outreach were a cornerstone of the Merrill-Palmer model from the beginning and continued throughout the decades.

Television
Merrill-Palmer also explored ways of reaching deeper into the community through new media. In 1952, the Institute joined 18 other organizations to form what became Detroit's public television station, WTVS Channel 56. For many years, Merrill-Palmer aired a half-hour program on childdevelopment and parenting.

Funded by a large gift from Rose P. Skillman, the Skillman Building opened its doors in 1965 for use by community
members to educate and support families. The building was intended to bring people of different backgrounds together
and foster community through events, programs, classes, clubs, and recreation.

Head Start
President Lyndon Johnson introduced Head Start in 1965, as part of his Great Society program. Head Start's national director at the time said, "Project Head Start offers resources with which communities may develop programs for preschool children designed to prepare them to meet the challenge of school and to learn to succeed rather than to fail." Keith Osborn, chairman of Community Services at Merrill-Palmer, served on the national advisory committee and began the Detroit branch of the program. The Head Start program still exists today and has served over 36 million children.